what's not to love about this business?  Digital World Pay is exciting people everywhere it gets known. The cool Bay Area was burnin' up last night  --  everybody from Sean doing a house meeting,  to Louie and Mike and Barb doing a house meeting --  everywhere the people are hearing the news they are seeing the light!  Here's living proof of why everybody should have a DWP biz:

HUGE WELCOME TO THE 9 NEW AGENTS WHO STARTED AS DWP AGENTS YESTERDAY!

FWIW Department (For What It's Worth):

Top 7 Credit Card Offers For Those With Excellent Credit

UPDATED: April 1, 2015
Do you have excellent credit?  If so, banks are actively looking to win you as a new credit card customer by offering some unprecedented deals.  Although banks have been more careful about acquiring customers with questionable credit since the 2008 Financial Crisis, they are now fighting harder than ever to win coveted customers with great credit. If you are in the excellent credit sweet spot, they are effectively giving you money (and a lot of it) to use their credit cards. These are the top 7 deals you can take advantage of today:


Blue Cash Preferred Card from American Express: Blue Cash Preferred Card from American Express (a NextAdvisor advertiser) is such a great cash back card that I have one. Cardholders earn a spectacular 6% cash back at supermarkets (on up to $6K in purchases annually), 3% on gas and at department stores like JCP, Kohl's and Macy's, and 1% on everything else. Plus you'll get a $150 intro bonus after spending $1,000 on purchases with your new Card in the first three months – that's a 15% cash back bonus on the first $1,000 you spend! In addition you'll enjoy a 0% 15-month intro APR on purchases and balance transfers. 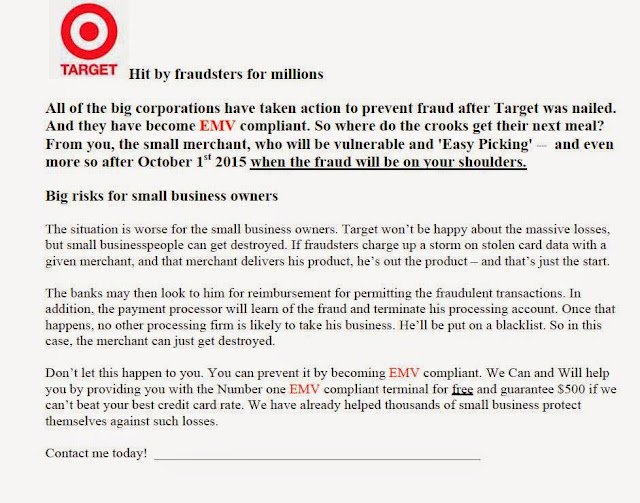 Cut and paste with YOUR contact info or email Barb for doc. 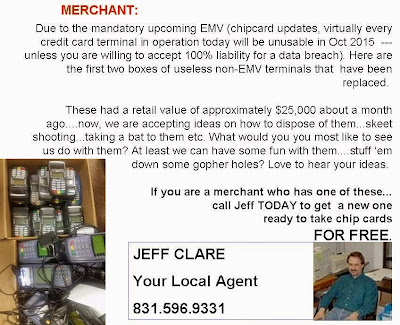 Banks are ramping up efforts to get more secure chip-embedded credit and debit cards into customers wallets, while merchants face a financial deadline for adopting the new technology.

By Tim Sheehan - The Fresno Bee

High-profile breaches of customer data at major retailers like Target and Home Depot over the past couple of years mean that in 2015, you’re more likely to find something new in your wallet: a credit or debit card with a computer chip embedded in it.
That microprocessor is the key to a system intended to provide increased security for customers, merchants, banks and credit card companies against fraud from counterfeited cards. The technology is called EMV (it gets its name from credit card companies Europay, MasterCard and Visa). It has been the standard for payment plastic in Europe and Asia for years, and it’s becoming prevalent in Canada and Latin America. According to EMVCo LLC, which oversees the development of worldwide EMV card standards, there are almost 2.4 billion EMV cards in circulation worldwide, and almost 37 million EMV-capable card terminals.


But in the U.S., issuance of EMV cards --also called chip cards or smart cards — has been minimal by comparison. Up until the past couple of years, most of the chip cards issued here were corporate cards or for customers who travel overseas. By the end of 2013, only about 10 million chip cards were issued in the U.S., out of about 1.2 billion total cards in American circulation. And while almost every store and restaurant can take magnetic-stripe cards, there were only about 2 million EMV-capable terminals that can communicate with the new cards.

That will change dramatically this year.
Throughout 2015, banks from huge multinationals to small community institutions are ramping up their efforts to get new chip cards into the hands of their customers. Most are replacing old magnetic-stripe cards as they expire with new chip cards (which will still have a magnetic stripe for older card readers). The EMV Migration Forum, which is steering U.S. adoption of the new technology, estimates that by the end of this year, the number of chip cards issued in the U.S. will grow to about 600 million, or about half of
the cards in circulation.


It’s also an important year for merchants who accept credit and debit cards. From retail giants to fast-food places to mom-and-pop merchants, businesses face a looming October deadline (set by the major card companies) for what the payment industry calls a liability shift for counterfeit card transactions. That means that unless a merchant has installed and activated card readers capable of processing a chip-card transaction, the merchant — instead of the bank — shoulders the financial loss on any sales made on a counterfeited chip card on a magnetic-stripe-only reader.

That’s because the computer chip not only stores the customer’s payment information, but it also generates a special one-time-only code for each transaction, making it almost useless to try to counterfeit the chip. By contrast, the magnetic stripe on the back of the card can still be easily counterfeited, and older card readers can’t tell if the card is authentic or a fake.


The EMV Migration Forum anticipates that by the end of this year, the number of EMV chip-enabled terminals in the U.S. will reach about 7 million.

Jim Ford, president of Fresno-based Central Valley Community Bank, described the EMV process as an encrypted “handshake” of recognition between the chip embedded in the card and the merchant’s card reader, and then between the card reader and the credit-card payment processor. “It’s a good and important step for banks and processors to get done on behalf of consumers,” Ford said.

What is the Pivotal One program for merchants?

F.Y.I. if the subject of market saturation comes up ever -- how interesting is this?!

In fact, as long as there is a market for a product, there will be new opportunities for distributors. For example, in a 10 year period Amway developed a whole new market for its products in the Japanese market, racking up a billion dollars a year in sales. Networking companies in the U.S. are constantly cracking new demographic markets. For instance, the fast growing hispanic market in the U.S. has represented significant growth. Companies like Discovery Toys have opened up the market to networks of teachers. A.L. Williams opened the market to networks of part-time insurance agents.


The expansion of the great franchiser, McDonald's, opens an interesting parallel to the growth opportunities abroad for American consumer products. The ratios abroad of people to McDonald's restaurants suggests the pattern of expansion possibilities, and also suggests the market won't become saturated for America's most famous consumer product, the McDonald's hamburger.
Just as for networkers, the world is waiting for McDonalds. Although networkers sell every type of consumer product imaginable, a fact of every day life about the core products of the industry, health products and cosmetics, says much about saturation of the opportunity to sell products. Walk onto the first floor of any department store and note it is almost entirely filled with cosmetics counters. Likewise note the health and nutritional section of every major supermarket chain. As long as you see these departments, you will know there is still plenty of market for networkers.
So next time the saturation theory comes up, tell them about Amway and Avon. Tell them about Go-Re-Mar. Tell them about Big Macs.  Source:  MLMLegal