WHY SHOULD YOUR CHURCH USE OUR KIOSK/APP/ONLINE SERVICES?

Great webinar training for the free church giving kiosks -- if you missed it, take a half-hour and watch it in the Webinar, Video section of your interface!

ALL YOU DO IS INTRODUCE PASTOR/CHURCH TO FREE KIOSK and invite him to a call -- FILL OUT THE KIOSK DEMO FORM  from Documents, interface. (Sound familiar?   ...nothing ever changes in what we do -- and aren't we glad!!) 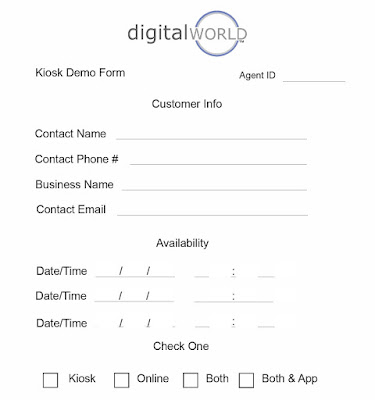 WHY SHOULD YOUR CHURCH USE OUR KIOSK/APP/ONLINE SERVICES?  Some stats may help:


1.  74% of Americans say they write no more than one check per month.

Now maybe that one check is going to their church, but rent seems like a more likely target. And even if it is somehow finding it’s way into the offering plate, it seems an increasingly tenuous position for churches to be staking their financial futures on a payment tool their congregation is using no more than 12 times a year. Especially when we know what tools are being used instead. (Americans transact 350+ non-cash payments per capita each year.)


Check usage has been more than cut in half since 2000, and it continues to plummet. Meanwhile, debit cards, credit cards, e-payments, and mobile payments continue to gain steam. This is certainly true among the younger generations (61% of people under the age of 24 say that they never write checks), but Millennials aren’t the only ones making the switch…


2. almost half of people in their mid-40s “never” write checks, according to a new survey by GoBankingRates.

In fact, as of 2014, givers over the age of 66 were just as likely to give a gift on a website as those 65 and under. It’s no surprise that young people were some of the earliest adopters of online and mobile giving, but their supposedly check-loving Grandparents have caught up quickly in the past several years.

Donors 66 and older are now just as likely to make their contributions to charity online as younger donors, according to a U.S. Dunham+Company/Campbell Rinker study.


The percentage of donors 66 and older giving online has increased from 29 percent in 2010, the first year of this study, to 59 percent in 2014. Donors 65 and younger give online at a 60 percent rate – no statistical difference given the study’s margin of error.

After cost – the most common objection  to online giving is some version of, “we’re a congregation of old people and none of them know how to use computers.” While demographics certainly play a role in giving trends, these statistics reveal that the old stereotype of the technologically-befuddled Senior doesn’t hold water anymore. Smart devices, social media, electronic payments, and email have pervaded every corner of our society. Including the generation that can still remember when color TV was the hottest thing around. Provide the “Golden Oldies” in your congregation with an opportunity to give online, and you may be surprised by how many respond.

The Internet has gone mobile and it isn’t going back! But really, you didn’t need a statistic to tell you that. All you need to do is look around your lobby after a service. Your members are already using their mobile devices to take notes or follow along in their Bible app during the sermon. They’re “checking-in”, posting to Instagram, tweeting quotes, and doing a host of other things that would’ve sounded like gibberish a few short years ago.
If your church’s website is optimized for laptops and desktops but not mobile devices, we’re only a few short years away from that website being unusable for over half of your visitors. Don’t wait! Start looking for ways in which mobile technology  can optimize your website and increase your giving today.

A little tip from Cora, who is seeing an uptick in the monthly revenues of tthe merchants she's working with:

REASON #1 WHY WE DO DIGITAL WORLD:

Hey guys, can you believe it has been 3 years since I got this first merchant for then Merchant Guard, now Digital World? Neither the merchant nor I knew what we were in for but we both are very happy with the outcome. Thank you and thank God for the opportunity. Look where we are now. Keep up the good work.

A lot of good things have come out of this opportunity. How could we have ever known that $195, one time would have such a great return. What are people thinking when presented with the opportunity and pass it up?

Angie signed up the Minute Grill her first week in DW:  it was the first merchant that anyone on in our team got --- and that was 2 years ago.   The merchant told Angie she had stopped taking credit cards 5 years before because 'it was too expensive'.

Angie assured her (on blind faith) that we would not be too expensive,  so merchant took a chance. First month, merchant's revenue DOUBLED! Second month went up again.  As you can see from notice above, merchant just happily signed up 3-year extension...


....which means 5 years of residual -- 60 months of residual -- for Angie from something she did her first week 2 years ago.  Add another renewal 3 years from now, and on and on:  John Daniels gets paid monthly on merchants he signed up 15 and 20 years ago!

Is it easy?  Does every merchant say yes?  Are there things to learn?

IS IT WORTH IT IN THE RESIDUAL PAYOUT?

What do you think?

Agent Sanford Valentine is quickly becoming 'The King of BBQ' in Texas... you heard his interview regarding the big bbq merchant at Mesquite Arena (check webinar section of the interface if you missed it) -- well, he just got another merchant of the bbq-type:  restaurant #1 of  18 in a chain in the DFW metroplex.  Only 17 to go and that's just a matter of getting the apps done.

Evidently Sanford has found his merchant niche!  And for my dime, TEXAS BBQ ROCKS!

How would you like to give your church a way to increase their donations by 30%? North American Bancard has just announced they have partnered with FreeChurchKiosk.com to give away a free Kiosk, iPad and card swipe to any church in the US in any language. The programs have a monthly fee that varies depending on the needs of the church. Here are a few features available:
-Text Giving
-Children's Check-In
-Mobile Apps
-Recurring Donations
-Event Registration/ Paid Events
-Volunteer signups
-Manage Groups
Go to the webinars section of the interface to see an in depth video and learn more about this awesome product. We also have marketing material available in the documents section.
But here’s where it gets even better. How would you like to offer your church a 20% return of our profit on their processing fees without charging them $195? We are excited to announce that this is now an option! Just send us the church’s tax exempt number and they will not have to pay the sign up cost to become a Digital World agent!

*They will count as one of your 14 merchants except you get 5% residual because they get the 20%.

*Processing rate is 1.89%, which is MUCH lower than the 3.95% Securegive and other top church servers charge.

*Watch for docs to be added to interface shortly.

Almost feel guilty cashing these! At least it pays my cell phone bill each month, OR I like to say, this is why I can go out to breakfast & lunch every week FREE! ⭕️❌⭕️ to u & beautiful Barb

*Les feels guilty because she works a full-time j.o.b. and only DW'd a little bit 2 years ago -- and still gets regular DW checks!

MORE FROM THE INBOX:

The EMV saga is still churning, it will be a long process. So you have not missed out there is still plenty of time to work merchants. If you remember in a meeting that I made mention that EMV would not be the only program that would move merchants to want new terminals, but I thought then and I still do. that it will be the Near Field Communications that will drive acceptance faster.

You see a merchant can still take a credit card with the old terminal but he can not take a credit card on a cell phone or what they call a wallet. So one approach might be to ask merchants a question, can you take EMV cards or better yet ask can you take my card on my cell phone. He will have to say no if he doesn't have a terminal that takes NFC. Then pull out all the articles about fraudulent cards and all the charge backs that are happening now, and how merchants are loosing money like never before.

Then offer not only to give him a new terminal that does it all FREE and a $500.00 guarantee that we will save him money. Ask for statement to give him a comparison. Show him some of the statements of other merchants that you have saved money. -- John Daniels

Thanks to the MANY requests for more from Top Agent/Founding Agent Chan Krohn, look for the next installment of Sean's Tips posting here early next week!

Thanks to Agent Brian Pugh for the following!